Charlie’s Chalk Dust Campfire Smores has rich hazelnut chocolate with the most perfectly toasted marshmallow set atop a sweet graham cracker and smooshed down to let all the amazing ooey-gooey goodness melt together.

Made in the USA

Recently I received a dry herb vaporizer by Storz & Bickel (S&B) to try out their Crafty+ dry herb vaporizer and ill be giving my thoughts and opinions about this device from design to functionality as well as the pros and cons. In comparison to the original Crafty, this newer version has had major improvements such as coming up with an application for users to adjust remotely. It may look quite complex to operate the device but I can assure you that the Crafty+ is actually quite simple to use once you learn the fundamentals. Storz & Bickel vaporizers are considered by a lot of people to be top-notched and I’m talking about the performance and the quality of the vapor is astonishing. It doesn’t matter which temperature setting you’re using, the flavor is still amazing which means that the extraction process from your herbs is so unique that you could taste every small detail of it in one full session until the end. The functionality is so simple to use that even beginners or inexperienced people will learn quickly on how to use it in no time.

The improvements to the Crafty+

Let’s talk about the upgrades and improvements done based on the original Crafty. According to S&B, the Crafty+ has a faster heat-up time, the battery lasts longer, and higher durability. I learned that the Crafty+ actually has improved airflow and a new temperature setting called Super Boost. Unlike the original Crafty vaporizer, the Crafty+ has a much more looser or smoother airflow experience in which I find it very reassuring to know that my herbs won’t get too used up in each session. On the other hand, the new temperature setting, Super Boost, is a new option if you feel like you want to finish up your herbs in one session altogether. 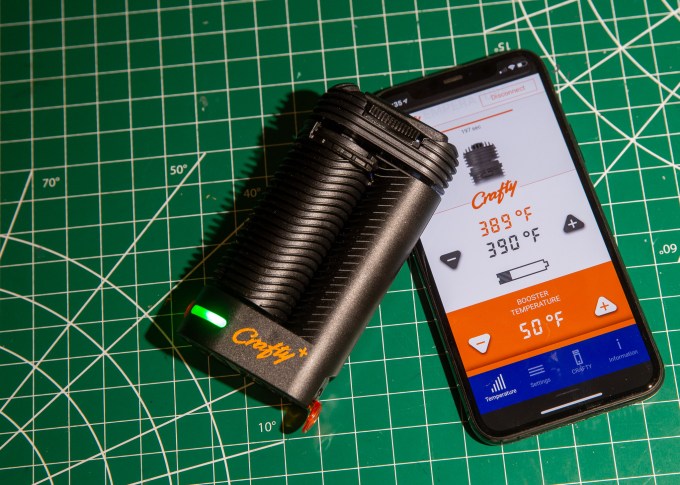 The Crafty+ controls are limited to one button which isn’t enough to control power and toggles through 3 buttons which is a struggle for most people. More and more people had hoped more for the Crafty+ with the number of buttons on board the vaporizer so S&B decided to create an application which can be installed onto your smartphones to adjust alongside other indicators like battery life, temperature settings, a locator (if you do lose it), technical information, instructions as well as a newsfeed of what’s new from S&B and more which you could find on the application. The original Crafty’s durability wasn’t very impressive because its systems couldn’t endure the heat which leads to many failures. So S&B made improvements including better firmware, circuit boards, and housing materials. Moreover, the cooling fins on the side of the device seem to redirect the heat dissipation away from the battery for safety purposes.

S&B did make an improvement on the battery, however, compared to the original Crafty that only lasted between 30-35 minutes, the Crafty+ actually lasted around 40 minutes of runtime. S&B also removed pass-through charging which is nice for a vaporizer with such a short battery life but the impact is very deep, therefore, the charging process will stop once the heater is on.

Like any other dry herb vaporizer, the Crafty+ avoids dangerous materials which could endanger one’s health when using, Medical grade materials like stainless steel and aluminum were used to design the structure of the vaporizer. The electronics are separated from the airway to prevent electrocution and it also holds electrical certifications tested by TUV SUD in Munich, Germany.

The Crafty+ improvements and adjustments are merely upgrades to the original Crafty, meaning that the purpose was to fix what was wrong with the original but as I see it, I wish that S&B had launched a new product rather than a new version of the original because it seems that S&B had every chance to fix the entirety of the original crafty such as the built-in battery and we all know that vaporizers with built-in batteries are vulnerable to battery failure which leads to having to replace the entire vaporizer back to the manufacturer and wait for the replacement after a month or so. Even if the battery has been improved significantly, the battery life wouldn’t last as long as a replaceable battery. Nonetheless, the Crafty+ still relies on the micro-USB port instead of the USB-C standard which would’ve given faster charging.

The original Crafty wasn’t one of my favorites, to be frank, I found the original to be very irritating sometimes, but with the new upgrades and improvements from the Crafty+, it lasts longer and the systems aren’t always failing from heating, plus with the Herb Mill XL grinder does a pretty good job which gives off this nice and exhilarating taste to it. Although I had higher hopes for the battery and charging method, the battery and charging is something I’m very picky about since I like longer-lasting battery life and a faster-charging time to keep up with me in each session. Overall, the S&B Crafty+ at this stage is still considered better than the original and is still considered one of the best vaporizers to have in the market.

Storz & Bickel covers any workmanship and defect issues with the Crafty+ for two years, extendable to three years with registration. Like all other Storz & Bickel products, the Crafty+ vaporizer is covered by our 100% Satisfaction Guarantee.

What’s in the box?

These products are intended for sale to adults 18 years older. If you are not legally able to purchase product in the state where you live, please do not enter the site.